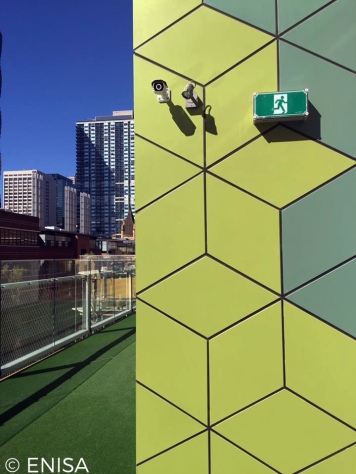 This week’s photo prompt is provided by Enisa. Thank you Enisa!

Barry’s job was simple – capture anyone who tries to run away from the mental institution. This institution has sheltered a lot many troubled minds (those as well which created trouble for some very powerful people). A lot has changed since its inception, but one thing hasn’t. Those who try to run away vanish.

This time the runner was an environmental activist who created a mess for a big-shot builder a while back. Barry laid down the breadcrumbs. The runner was following the same path Barry wanted him too, a path everyone else before him covered too. Then he was on the spot, right in front of the camera. Barry just needed the runner to look at it. He pushed a button and a sound buzzed from the “Runner” sign which was right next to the cam. The runner looked at it and it was done. A flash came out of the cam and the activist vanished into thin air.

The “Runner” sign blinked for some time. It has added one more soul to its stock.

9 thoughts on “Barry’s Job was Simple”