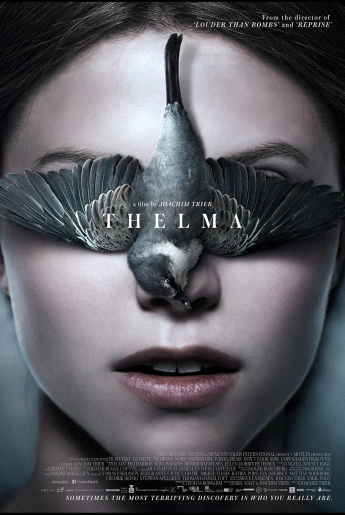 Ones life choices are affected by a number of factors around us. One such factor is society and their customs. Religion is one such factor which defines many aspects of our behavior. Some type of behavior might be prohibited by certain religions. They proclaim it to be sinful desires. One can easily get behind it and choose between either the religion or the desire. But what happens with those who struggle with it as they don’t want to believe themselves that they have similar desires.

Thelma is the story of a young Christian girl struggling with the fact that she has a crush on a female student. Her life is made even more complicated when she discovers she has psychokinetic powers which create unexplained disturbances whenever she goes out of her comfort zone.

I was eagerly waiting for this movie. The premise seemed interesting and the Joachim Trier’s direction is refreshing. I loved Louder Than Bombs and Oslo, August 31st. It is evident that he knows how to portray complex emotions. In all his movies, the emotional upheaval always takes center stage. Similarly in Thelma, in disguise of her uncontrollable powers, we see how difficult it becomes for someone to suppress forbidden feelings. It’s like trying to hold a ticking bomb down instead of diffusing it, hoping it won’t blow. Because of it being a spiraling emotional roller coaster ride, the film gets darker by the minute. At one moment your happy, and then suddenly something happens which makes you sad, even scared in case of some scenes.

The movie is visually gorgeous. It’s intense theme is well supported a cinematography which is like a psychedelic dream.

There are plenty of reasons to watch Thelma. Whether you find flaws in the acting, the story, the direction, you will end up with a unique experience which you won’t regret having.